On Friday 13th October we hosted ‘An Evening of Empowering Women’ at Gonville and Caius College, Cambridge.

The evening involved talks from inspiring women, a panel discussion on leadership, a silent auction, networking and a keynote address about  Homeward Bound‘s vision for a collaborative network of women working for a sustainable future.

Here’s a video capturing what was a wonderful, inspiring evening.

In February 2018, UK-based Maddie Brasier, Hannah Laeverenz Schlogelhofer and Cathy Sorbara will embark on the largest ever female expedition to Antarctica as part of a groundbreaking leadership initiative for women in STEMM (Science Technology Engineering Mathematics and Medicine) known as Homeward Bound. It aims to heighten the leadership capability of women to enhance their influence and impact on policy and decision-making as it shapes our planet.

As part of this phenomenal opportunity, each woman must raise over $16,000 USD to cover the costs of the voyage and leadership programme. Full details of the cost breakdown can be found here.

To help fund this journey, we invite you to take part in ‘An Evening of Empowering Women’ and create a stronger network that can follow Homeward Bound’s ambitions. 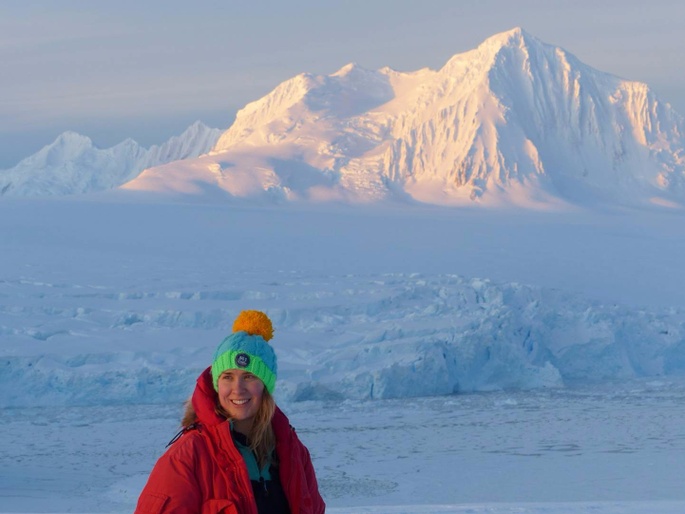 Maddie Brasier is a PhD student at the University of Liverpool and Natural History Museum, London. Her PhD research combines DNA barcoding, modelling and stable isotope analysis to further our understanding of the diversity, biogeography and trophic traits of Antarctic Polychaetes. She has collaborated with British Antarctic Survey and the US Antarctic Program on expeditions and research projects. She is passionate about science communication; regularly organising and delivering outreach events as a STEM Ambassador and with the UK Polar Network. After her PhD Maddie wishes to remain in polar science and is really excited to go south with Homeward Bound!

Hannah loves the outdoors and enjoys trekking, ski-mountaineering, yoga and contemporary dance. She studied Natural Sciences at Cambridge, specialising in Chemistry. She then continued at Cambridge joining the Nanoscience and Nanotechnology Doctoral Training Programme. Hannah is now a PhD student working in the Physics and Plant Sciences Departments at Cambridge and is a Scholar of the Winton Programme for the Physics of Sustainability. Her research is in the field of microbial ecology and focuses on the mutualistic nutrient exchange between algae and bacteria.

Cathy completed her PhD in 2014 at the Technical University of Munich, Germany. Her dissertation focussed on the molecular mechanisms which lead to axon degeneration in Multiple Sclerosis. She has since shifted gears to help academics find their own passion.  She currently resides in Cambridge UK where she is the Chief Operations Officer of Cheeky Scientist, a training platform for academics who want to transition into industry. She also cares about strengthening the voice of women in science and is Chair of Cambridge AWiSE, a regional network for women in science, engineering and technology in both industry and academia.

‘An Evening of Empowering Women’ will bring together a broad range of inspiring speakers working in a variety of different careers.

Janneke Adema is a Research Fellow at the Post-Digital Cultures Research Centre at Coventry University (UK). In her research she explores the future of scholarly communication and collaborative knowledge production, where her work incorporates, among others, experimental forms of book publishing, radical open access, book history, media studies, cultural studies and critical theory. You can follow her research, as it develops, on openreflections.wordpress.com

Professor in High Energy Physics. Fellow and Director of Studies at Trinity College.

Val Gibson is the Head of the High Energy Physics Research Group in the Cavendish. She holds a Special Honours BSc in Physics from the University of Sheffield (1983) and a DPhil in Experimental Particle Physics (1986), The Queen’s College, Oxford. She was a Fellow in the Experimental Physics Division at CERN (1987-89) and came to Cambridge in 1989 as an SERC Advanced Fellow, held concurrently with the Stokes Senior Research Fellowship at Pembroke College (1989-1994). She was appointed as University Lecturer and Fellow of Trinity College in 1994, Reader in 2006, held a Royal Society Leverhulme Trust Senior Fellowship (2007-08) and became a Professor in 2009.

She enjoys science communication and is a Patron of the Gravity Fields Festival held in honour of Sir Isaac Newton. She is a champion of Women in Science and spearheaded the Cavendish Laboratory’s success at achieving an Athena SWAN Gold award in 2014. She is a School of Physical Sciences Equality & Diversity Champion and Chair of the Institute of Physics Juno Panel. More details about her Women in Science activities can be found at the following link:  http://www.hep.phy.cam.ac.uk/~gibson/Women%20in%20Science.htm

Managing Partner of Strategy Together, a network of experts in strategy execution

Kit is a business consultant and executive coach specialising in making strategy happen. She has spent more than 25 years helping leading organisations throughout the world manage strategic change to create sustainable value. She is the recognised global expert and thought leader in strategy mapping.

With her forthright, collaborative leadership style, she works with leadership teams to help them implement the right strategic processes, disciplines, organisational changes, and behaviours to achieve and manage business strategy.  Kit is a coach in personal strategy and practice – making whole of life conscious choices that are congruent with personal aspirations and values, and clarifying alignment with organisational aims and objectives.

Kit donates a significant amount of her time to leading Homeward Bound as Strategy Management Officer and Strategy Programme Faculty.

Amanda has worked in consulting technology for most of her career. She is a savvy business and commercial executive with significant P&L responsibility, Amanda has 26 years of extensive international leadership and general management experience at CEO and board level. She has a demonstrable track record of success leading transformations, building start-ups within global businesses, and rapidly growing businesses in several industries. Amanda has held leadership positions across all major business areas, such as CEO, Operations, Strategy, Marketing, Sales, Alliances, Consulting, Supply Chain and Business Units.

After starting her career at General Electric, she worked as a partner for KPMG and ran energy businesses for Electronic Data Systems. She then sat on the executive committee of IT group Logica and also worked for banking technology group Misys before joining Microsoft in 2015.

Tapoka Mkandawire is a graduate student at the Wellcome Trust Sanger Institute. She is passionate about science as well as the effective communication of science, and the positive impact this can have on society. Tapoka is interested in the challenges faced by women in STEM in African nations and how the global community can work together to find meaningful solutions to these challenges.

Hailing from Malawi by way of Manchester and Oxford, she has had the opportunity to work as a molecular biologist in both developed and developing contexts, affording her a unique perspective on the challenges faced in each.

Born in London in 1974, Troubridge’s interest in photography began in her late teens when her father gave her a camera. Whilst completing a degree in American studies in London & New York, Amelia used the time to photograph the world around her.

Her monograph ‘Joan Of Arc Had Style’ was published by Trolley books in 2015. The book was a celebration of feminine power, through a collection of personal and commissioned portraits of women she had collected over a ten year period.

In 2017, Innovate UK commissioned Amelia to photograph female entrepreneurs around Britain. The work was exhibited at Getty Images Gallery in London, and will go on tour in 2018.

With 14 days to go till we set sail to Antarctica with Homeward Bound we are very excited to see our interview with Cambridge Edition published! Check it out here

With less than three weeks to go until we head to Antarctica, here is a look back at our dance performance on a chilly, bright day in December. ‘Making Waves’ was created and performed by Cambridge Contemporary Dance. The piece explores ideas about leadership and collaboration, taking inspiration from the themes of Homeward Bound and the imagery, … END_OF_DOCUMENT_TOKEN_TO_BE_REPLACED